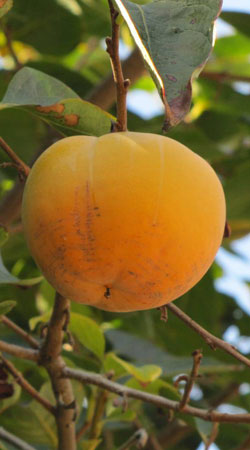 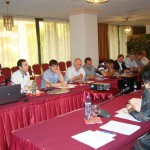 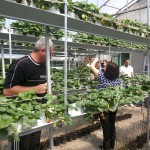 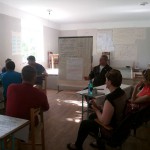 On May 16th, 2014 with the cooperation of “Small and Medium Entrepreneurship Development National Center” (SME DNC), training on “Marketing and Branding” was organized for Meghri farmers. According to the Memorandum of Understanding (MoU) between Center for Agribusiness and Rural Development (CARD) Foundation’s “Markets for Meghri” (M4M) project and SME DNC it was decided to mutually organize a training and an experience exchange tour for Meghri farmers. The topic of the training was not chosen accidentally: it was done based on the results of the previous B2B meetings[1] organized by M4M and market survey, conducted by “I-Consulting” LLC in cooperation with M4M project, that looked into practices of supermarkets and consumer preferences related to Meghri dried fruit production.

A special guest Mr. Akihiro Tsukamoto, Chief Advisor at the “Project of Development of Local Production and Promotion of Local Brands in Armenia”, was invited to conduct the abovementioned training. Mr. Tsukamoto presented the main concepts of group marketing and the platforms of its usage.  He also spoke about the importance of branding and the possibilities of its application. At the end of the one-day training Mr. Tsukamoto presented also “5 S: a Workplace Organization Method”. The 5S methodology refers to the creating of more focused and systematic flow of work, which concentrates on augmenting competence and lowering wastage of resources. It is originally a Japanese concept which has been profoundly applied in all sectors across the world. During the Q&A session farmers could raise their concerns and get prompt answers from Mr. Tsukamoto.

On the same day Meghri farmers left for Ijevan, Tavush Region for an “Experience Exchange Tour”. This tour was organized in cooperation with SME DNC Tavush and Syunik Regions’ representatives and M4M project in accordance with the Memorandum of Understanding signed between M4M and SME DNC. The main goal of this exchange tour was to show what kind of support SME DNC office in Syunik could bring for the establishment of small and medium businesses in the region. This event was also designed to show the best practices of successful business models, new technologies of irrigation and dried fruit processing, packaging, labeling, and storing.

Farmers started their tour by visiting “BagFruit” LLC which was established with the financial and cooperative support of SME DNC Tavush office. “BagFruit” is a successful business model of collection center for dried fruit on legal basis- a model missing in Meghri region. According to the debates during the previous B2Bs organized by M4M, this should be mandatory for Meghri dried fruit producers in the near future. As one of the Meghri farmers stated: “This is a real and acting model, and it is very useful to see it personally, as our next step will be to establish something similar in Meghri”. In Ijevan, farmers visited some home based dried fruit producers and new orchards of persimmon and fig. The aim of this visit was to see and compare home based production of Tavush and Meghri regions. Famers also had the chance to get familiarized with the new technologies of modern greenhouses, by visiting the hydroponic greenhouse with drip irrigation system, also established by the support of SME DNC. This visit gave them a chance to think about alternative business ideas. Moreover, Meghri farmers witnessed the functioning of other small businesses in the sphere of new varieties planting such as pistachio and olive, which can become a very adaptive and profitable business in Meghri region as well. The experience exchange tour was concluded with the visit to SME DNC Tavush office where the office representative presented the support processes which they have provided to the start-up small and medium businesses of the region.

By the end of the event, Meghri farmers could make some non-formal agreements with businessmen from Ijevan regarding the fresh and dried fruit delivery to Ijevan for further processing and selling.